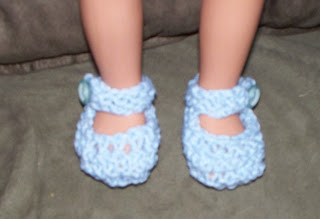 Both the left and right shoe can be worked the same.

Abbreviations used in this pattern:
K = Knit
pm = place marker
m1 = Make one (this can be done by knitting into the front and back of a stitch)
ssk = slip slip knit
K2tog = Knit 2 together
YO = Yarn Over

Fold the shoe in half and sew along the sole of the shoe and the back. Make sure that when you are sewing the second shoe that strap is on the opposite side as your first shoe, or you may end up with two left shoes. Sew a button on to the side of the shoe to secure the strap. Try it on your doll and make a matching purse if desired.

Great job.!! Those shoes are super cute. I can imagine cozy they are.

Well done, can't wait to knit these but as it is nearly 11pm think I will start them tomorrow, many thanks for the freebie patterns Pam UK

I am going to attempt this pattern even though I probably shouldn't try LOL. Could you tell me what BO stands for?

thanks for sharing the pattern!

BO stands for Bind off.

Good luck with the pattern! Send me a picture when you're done to Porphyriac@aol.com. Make sure you put Doll Shoes in the subject heading.

BO means bind off, or cast off.

i found this shoe to be very tight. My daughter has several dolls and the opening of this shoe didn't fit any of them... i am going to attempt an altering of this pattern. if i am successful i will post it to you so you can add it to your pattern... thanks! love them, as they are super cute!

hmm...tight shoes... Sorry about that. You could always try a larger pair of knitting needles or a different type of yarn. I hope they eventually worked out for the doll.

Hi, Thank you for the pattern. I tried making these three times and each time was a disaster. What am I doing wrong, either the strap is too short or the shoe too small. I have tried using smaller larger needles to no avail..I am so frustrated. My question is do you start a new ball of yarn toward the end or what. Any help would be appreciated. I consider myself a knitter but am having difficulty. I would appreciate any help. Thanks again. Muriel NYC

hey Muriel,
Sorry I took this long to reply. Towards the end, after you bind off, you should cut your piece of yarn and Cast on the 6 new stitches. If you are still having difficulties, email me: porphyriac@aol.com

another note for Muriel :-D The 6 cast on stitches get joined to the 5 stitches that are on the holder. Like I said in the last comment, Email me if you are still having troubles.

Great pattern, easy to do and very quick

Thank you for posting this pattern.

Thank you for the patterns you worked on they are very neat. 'I am working on some items for Barbie dolls and 18-inch dolls some of the items are from patterns i have others are design-as-I-go. i like some of the patterns you have and may try to make some of those items i like. i could share pictures or if you can find "Not Your Mama's Knitting" or "Not Your Mama's Crochet" books you could use some of those patterns with smaller or larger hooks or needles to make the items from those. the one item i am almost finished working on is a capelet from the crochet book, i used a smaller hook and yarn than the pattern called for and changed colors every 6 rows

A few of my favorite places to visit